What do the scholars of the Dīn and muftīs of the Sacred Law state regarding the following issue: I live in the likes of the U.K. and one usually has to take out a loan of approximately £27,000 or even more, then the government deducts this from the wage later on when it reaches a specific threshold. If the wage is less than this threshold, then the student loan does not need of paid off. Likewise, if someone passes away or has a disability, the student loan is also wiped off in this case. Similarly, if it is not paid off within a certain time period, the remaining is wiped off. Sometimes we may have to pay interest when paying back, so in this case is it permissible to take out a student loan, also the second question is that the government actually regards this extra amount we have to pay back as interest, so there’s no impermissible matter occurring in this case is there?

According to my research, Muslim students may apply for a student loan from the government, and to take out a loan from a non-Muslim government is permissible, because this is for a loan and to contract such an agreement (taking out a loan from them on the condition of paying back more) is not regarded as interest, because it has been mentioned in Hadīth that,

Even though there is discussion regarding the chain of narration of this blessed Hadīth, however a Muslim benefiting from a harbī non-Muslim[1] via an irregular contract is established from a very strong and solid reason. The reason is that the wealth of a harbī non-Muslim is mubāh [permissible], thus it permissible for a Muslim to consensually receive wealth from a non-Muslim via an unsound contract, but only when there is no deception or lying. This is because there is no usury (interest) between the two, rather this wealth is permissible, even though the government itself regards it as interest. Just as it is stated in al-Hidāyah,

Furthermore, it is stated in Radd al-Muhtār,

“Without doubt, it is permissible for a Muslim to receive wealth from a non-Muslim with his consent, even if it is via interest or gambling, because their wealth is permissible for us. However, deception is harām, and anything which is accepted with their consent is not deception.”

It is further stated in Radd al-Muhtār,

“If a Muslim enters a non-Muslim governance in the state of safety, then there is no problem in accepting wealth from non-Muslim harbīs with their consent via any method, because he has taken permissible wealth free from any form of deception, thus it is halāl for such Muslim. A prisoner and a free person are both equal, up to the extent that if someone sold them a dirham in exchange for two, or sold them carrion [dead meat] in exchange for some money, or took their wealth via gambling; these are all halāl for such Muslim.”

Sayyidī Alā Hazrat Imām Ahmad Ridā Khān, upon whom be infinite mercies, has stated that, yes, it is permissible to receive wealth from a non-Muslim – not a dhimmī[2] or musta’min[3] – without any deception or breach of promise from one’s own end, albeit it being via an irregular contract, but only with this intention and not with the intention of interest or other prohibited matters, etc. Even if the one giving regards it as something else or considers that what he is saying is credible and not the other. [For example, when the government regard it as interest, and we say it is not interest, the government still regards it as interest, regardless of whether we call it interest or not].

He also states in another place that if a £10 note was sold for more, then it is permissible to take this from both a Hindu or Muslim. If someone gave a loan and the one had to pay back extra, then this is definitively harām from a Muslim but permissible from a Hindu, provided that he is not taking it with the intention of interest.

It will not become interest just by calling it interest:

The only thing which remains to discuss is that this student loan is regarded as having interest, so the ruling according to sharī’ah is that it will not become interest just by calling it interest.

Sayyidī Alā Hazrat Imām Ahmad Razā Khān, upon whom be infinite mercies, states, while concluding from a Hadīth, that the honorary personality, the Leader of the believers, the Leader of the pious, Sayyidunā Abū Bakr Siddīq, may Allāh Almighty be pleased with him, attained wealth from the non-Muslims of Makkah on the condition of permission from the Noble Master of mankind ﷺ. However, placing conditions is not proper according to Sharī’ah. The proof is clear that regarding a permissible action as impermissible does not cause it to become impermissible. Just as what is mentioned in al-Fath, etc taken from al-Mabsūt derived for our school of thought in regards to this chapter.

He further states that when further clarifying something, the actual ruling applies to the reality of something, not on the names of it, for example, if someone is known by the name Zayd, and then he is named “interest”, he himself will not become interest or harām for that matter. Yes, the only wrongness in this is that a permissible & halāl thing was named something harām without any need or purpose. If there is a purpose, then this wrongness will no longer remain either, just like what Sayyidunā Ibrāhīm, upon whom be the utmost blessings & salutations of perfection and upon all the other Prophets, stated regarding Sayyidah Sārah, may Allāh Almighty be content with her, that indeed she is my sister.

Then the scholars have actually regarded the matter of taking permissible wealth for a certain cause as credible, let alone a purpose which is to spread the truth and eradicate any wrongness, as this is clearly more of a reason for it to be credible to take permissible wealth. Even then, hypothetically speaking, if there is no actual purpose for taking this wealth, in essence, we still do not doubt the lawfulness and purity of this wealth.

In the case of a study loan, it is actually permissible wealth which is received, because Alā Hazrat Imām Ahmad Ridā Khān, upon whom be countless mercies, states,

“Whatever is given in a non-Islamic governance from a Harbī is permissible wealth; it is not interest.”

Also, the following objection is not to be made nor can it be made that our Imāms have made interest permissible. Rather, it is not actually interest here, so how can it be regarded as interest, just as Sayyidī Alā Hazrat, the Imām of the Ahl-e-Sunnat, Imām Ahmad Razā Khān, upon whom be infinite mercies, states that our Imāms have never ever regarded interest as halāl in any case; this is mere lie & deception from the ghayr muqallids[4]. Rather, the ruling in such occurrences is of permissibility – the reason for this is that it is not actually interest; such a person is only fulfilling his own right or attaining permissible wealth via a permissible method, even if, in the case of a certain need, the one giving has regarded this money as anything [e.g. interest, etc].

Clarification to the condition of “the contract is beneficial to a Muslim”:

What remains to discuss is the particular rule of the one attaining benefit from this irregular contract is a Muslim, not giving benefit to a non-Muslim, because it is impermissible to give interest to a non-Muslim. Just as it is stated in Bahār-e-Sharī’at that it is not prohibited to accept & receive wealth from a non-Muslim in the case of an unsound contract. In other words, the contractual agreement which is prohibited between two Muslims, if done with a non-Muslim Harbī, is not prohibited, on the condition that this agreement provides some benefit for the Muslim.

According to my research, the agreement in a student loan provides many many benefits for Muslims.

This is because the total loan that a student takes out from the government is approximately £27,000 and a further loan [aka maintenance loan] is given alongside this in order to cover the cost of rent, living expenses, etc. which is approximately £20,000-£24,000. A student is required to start paying this back only after graduation within a 30 year period and only when their yearly wage is above £25,000. For example, if a student is jobless all the way from graduation up until the next 30 years, or he finds a job but the yearly wage does not exceed £25,000, then such a student will not need to pay back even a penny; it is all wiped off. In the aforementioned case, he does not even need to pay back the actual loan itself, so how can it be that he is paying back anything extra. Please take a look at the table shown below. 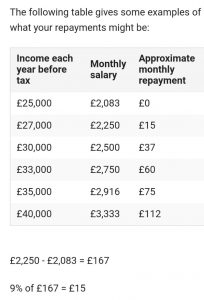 For instance, even if the wage for a graduate is £27,000 per year after completing university for at least 30 years, even though achieving a wage of £27,000 itself is quite a feat in the current climate, then the government will deduct only £15 each month, which after 30 years equates to £5,400. Even then, this is only if a student receives a job of this calibre straight after graduation, though this is next to impossible due to the fact usually one is required to have 5-6 years of relevant experience in that particular field, so this amount of time will be spent gaining this.

Well even if one’s wage is £35,000 per annum, the amount which would have been paid back in 30 years equates to £27,000, even though achieving this is equal to accomplishing the impossible, however, even in this case someone is able to pay back only the full loan amount in a very difficult scenario. Though if his loan was of £50,000 due to accommodation, etc then he will still not be able to pay back the amount loaned from the government in its entirety, even with a highly paid job, let alone paying back anything extra.

In short, the case of paying back any extra amount on top of the loan is very rare.

Even if a Muslim does receive a post with a high-paying salary and it actually results in him paying anything extra, even in the case of taking out a loan and studying, a Muslim does in fact benefit in terms of the end gain & result, as he will become qualified for a decent job due to having a degree. If he did not take the loan, then he would not be eligible for such a job, and would not be able to receive a good job in the U.K. other than the standard, kind such as working in takeaways, taxis, posting leaflets, etc. Thus, due to these reasons, it is permissible to take a loan from the government for the purpose of studying, and this is such a contractual agreement which is beneficial for a Muslim.

[1] A non-Muslim not under Islamic Law.

[2] A non-Muslim living in a Muslim governance paying tax & under legal protection.

[3] A non-Muslim harbī under short term protection but not paying tax.

[4] Those who do not believe in following any Imām.

Read the original Urdu answer here: [Q-ID0668] Is it permissible to take out a student loan in the UK?

[Q-ID0436] Banks in the UK are offering free cash if we switch to them, is it permissible to accept this money?

[Q-ID0260] Is it permissible to take out a mortgage in England?

[Q-ID0213] Is it permissible to donate or sell our body parts to others in Islam?

[Q-ID0228] What is the Islamic ruling on taking out a Life Insurance policy in the UK?