[Q-ID0186] Is it possible that the Prophet’s intercession will include the non-Muslims in Hell?

What do you say, O Ulama of Islam, concerning the one who claims that Al-Sayyid al-Imam al-Murtada Al-Zabidi al-Hanafi (may Allah cover him with Mercy) believed that “it is possible that the Prophet’s intercession will include non-Muslims in Hell, just as it helped them at the Judgement.” [Between Heaven and Hell, Islam Salvation and the Fate of Others, pg 139] and that this statement is present in the Sayyid’s commentary upon ‘Ihya Ulum al-Din’ known as ‘Ithaf al-Sadah al-Muttaqin’? Please explain. May Allah reward you.

In the name of Allah al-Rahman al-Rahim

The reply, when the matter is as the questioner has described, is that this is a claim that has no proof nor is it supported by any evidence and it is a false assertion. The one who has made this claim is incapable of establishing any proof for it. There is no proof for this claimant, in the book ‘Ithaf as-Sadat al-Muttaqin ‘ala Ihya’ Ulum al-Din’, neither in wording nor in meaning and no intellect would accept the false assertion of this claimant upon al-Sayyid al-Imam al-Muhaddith, the pillar of reliance amongst the illustrious exacting research scholars, al-Murtada Muhammad ibn Muhammad al-Husayni al-Zabidi (may Allah have Mercy on him).

All that this claimant has alleged is incorrect and it has not remained hidden upon the Sayyid the Imam the statement of the Messenger (salAllahu alayhi wa sallam) at the end of the lengthy hadith:

“I have been given Intercession and I have stored it for my Ummah so it is for the one who did not associate anything with Allah.”

“There is an answered supplication for every Prophet, so every Prophet hastened his supplication and I have stored my supplication as intercession for my ummah on the Day of Judgement, so it will encompass, by the Will of Allah, whosoever passed away from my Ummah not associating anything in partnership with Allah [Sahih Muslim and others]

“My intercession is for the people of Major Sins from amongst my Ummah.”

[Sunan al-Tirmidhi and others]

also the statement of the Messenger of Allah (salAllahu alayhi wa sallam):

“My intercession is for the people of sins from my ummah…” (to the end of the hadith).

The people of sins and major sins are believers and not disbelievers. They carry sins but these sins do not take them outside the fold of Iman so the Messenger (salAllahu alayhi wa sallam) will intercede for them.

Behold! Here are the books of the Imam before us morning and evening and there is no semblance of what the claimant has claimed in ‘Ithaf al-Sadat al-Muttaqin’ neither in wording nor meaning, neither explicit nor implicit!

So from where did he judge the beliefs of al-Imam al-Murtada with that which he has uttered? While belief is a hidden affair, which is not possible to know or reach except through its expression on the tongue, or its clear expression in writing.

This claim of the claimant is something this mentioned book is absolutely devoid of, so it is far-fetched that it should be found, rather it is something impossible. Perhaps this claim arose from a feeble comprehension and shortcomings in scrutinising and verifying? Thus it is incumbent upon this individual that he look again with a lofty concern and seek forgiveness from Allah the Most High for that which has issued from him in dishonour with respect to the right of the Imam the Muhaddith and that he rectify what he has stated and claimed. So if he stated it in a book that he wrote or an article that he penned or mentioned it in a lecture that he delivered then it is upon him to correct his thinking concerning that which he has implanted in his mind and study closely the details of the Intercessions on page 494 volume 10 of ‘Ithaf al-Sadat’. Perhaps it is there that he has not understood the statement of al-Imam al-Zabidi (may Allah cover him in Mercy) when he states:

“al-Qadi ‘Ayyad has mentioned a Sixth Intercession and it is the Intercession of the Messenger (salAllahu alayhi wa sallam) for his uncle Abu Talib in lessening his punishment as mentioned in Sahih Muslim ‘I found him in the depths of the fire so I took him out to the shallowest part of the fire.’”

This is even though his uncle was a disbeliever. However his uncle will remain in the fire and he does not benefit from this intercession the way the disbelievers benefit from the Greatest Intercession and they will not attain salvation from the fire so where is this from that. So with regards to the Specific Intercession the reason for it is an ennoblement of the believers despite what they carry from major sins. Whereas Abu Talib is not from those ennobled and rather the intercession in his case is recompense for that which was presented of service (to the Messenger of Allah (sallAllahu alayhi wa sallam) like when Allah (Glory be to Him the Most Sublime) informed Sayyiduna Musa (alayhis salam):

“Then speak to him gentle words: perchance he may be mindful or he may have some fear.”

This is because Sayyiduna Musa (alayhis salam) was brought up as a child in the household of Fir’awn so he had received a service that Fir’awn had rendered.

Or perhaps the claim of the claimant arose from not understanding the statement of al-Imam al-Murtada (rahmatAllah alayh), starting seven lines from the bottom of that same page:

“So if you say which intercession is it that the Prophet salAllahu alayhi wa sallam has stored for his ummah?”

And he replied to this question with an answer saying:

So he mentioned four possibilities in detail. As for the first and second then it is apparent that within the book they are easy to understand. However, in the third possible explanation he says:

“It is possible that the intended meaning is absolute intercession that is common in all five types of intercession. The fact that this ummah shares with them (the ummahs of the other Prophets (alayhimus salam)) inside those or in some of those does not negate the Prophet (salAllahu alayhi wa sallam) having stored his intercession for his ummah, perhaps he will not intercede for other than them from the nations rather their Prophets (alayhimus salam) will intercede for them.”

In the fourth possible interpretation he says:

“It is possible that the intercession is also for other than them, secondary to them…”

However these that are secondary and share with them in the intercession are the other ummas in secondary following. All of these possibilities are restricted to and specific with regards intercession for the believers whether they are from the Ummah of the Prophet salAllahu alayhi wa sallam first and foremost, or from the preceding nations secondary to them because they are from the believers who believed in their Prophets (alayhim as-salam) and died upon Iman.

How can the Specific Intercession include them when it is confined to the people of Iman, despite them carrying major sins? Nor can the rational person draw a parallel between the Greatest intercession and the Specific intercession and say the disbelievers in the fire will benefit from it. It is impossible to reach this understanding from the book ‘Ithaf al-Sadah al-Muttaqin’ or to conclude that this is the belief of al Imam al Murtada. So it is upon this person that he seeks forgiveness from Allah and to reflect in a manner appropriate to the personalities of the Ulama and leave speculation.

Allah the Most High says:

“And go not after that thing of which you know not. No doubt the ear and the eye and the heart all are to be questioned of.”

May Allah send his peace and blessings on Our Liege-Lord Muhammad and upon his Family and Companions.

The poor slave of Allah the Most High

May Allah pardon them all
The Protected Sanctuary of Zabid, Yemen 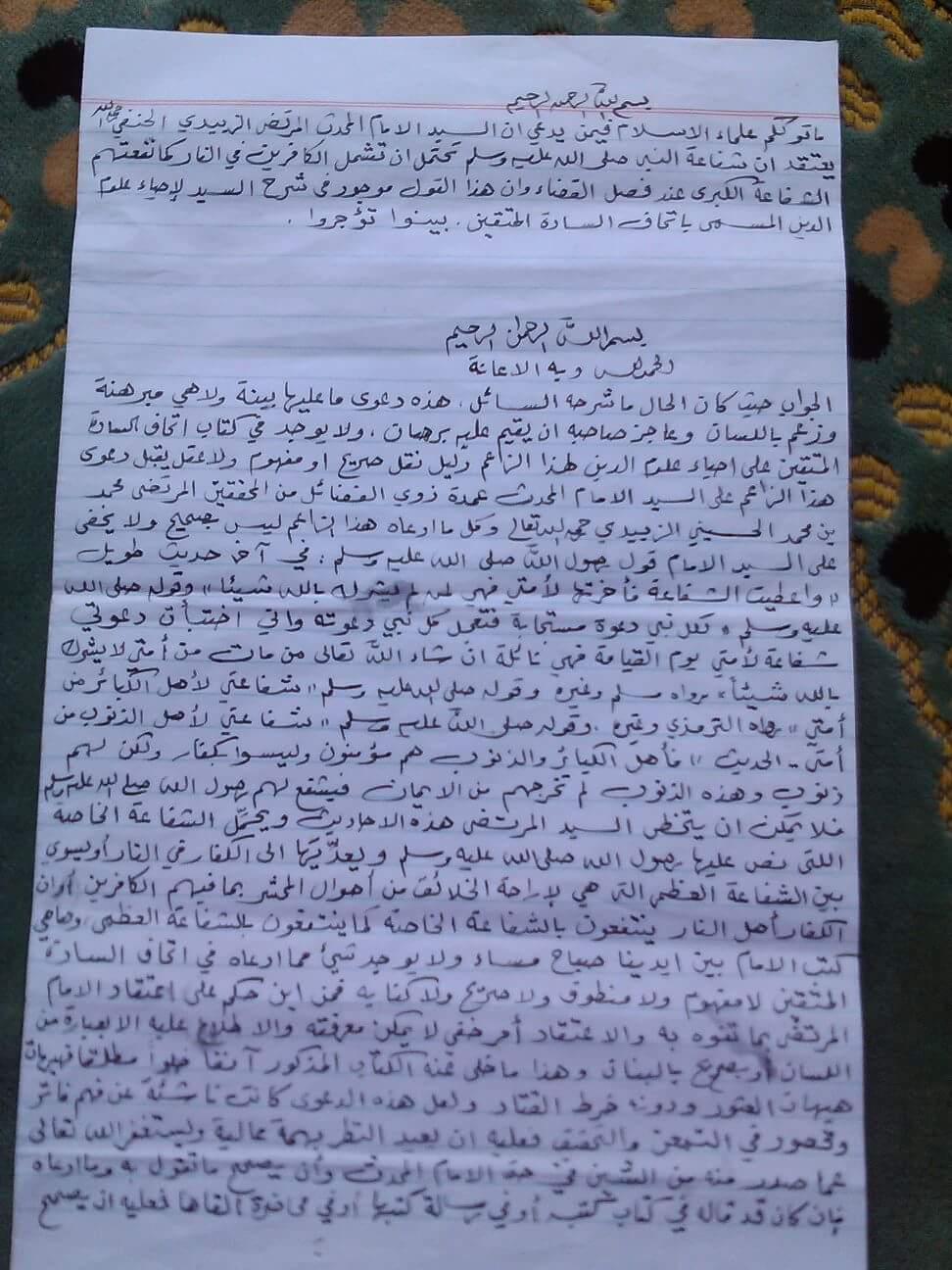 [Q-ID0265] Will all Disbelievers of Islam enter Jahannam eternally?

Refutation of ‘The Study Quran’ by the Ulama of Zabid

[Q-ID0054] My non-Muslim neighbour passed away, can I attend his funeral?