How did Islamaphobia and hatred for dark skin people become prevalent in England, and by extension the racist bigotry across the UK and occupied Northern Ireland? 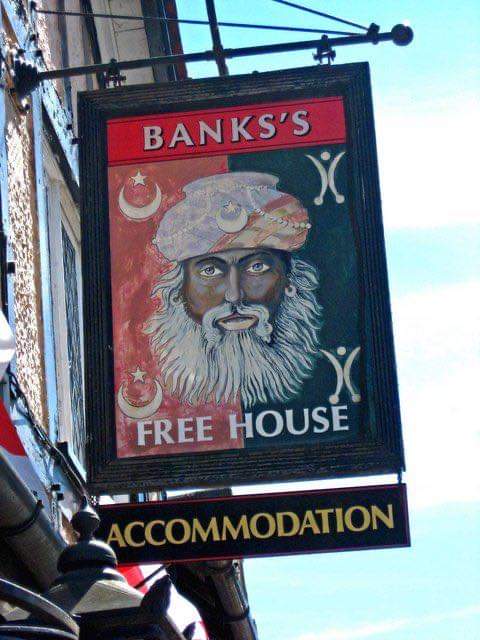 The picture posted is from one pub of many in this country, including my home city of Birmingham, depicting a Muslim head. Caricature depictions pre-date modern ‘wars on terror’. These public houses are from the Middle Ages or even during the Crusades and just after the Crusades. These public houses are named ‘The Turks Head’ or ‘The Saracens Head’. A ‘Saracen’ is the name for a Muslim Syrian warrior, as Salah ad-Din was a Kurdish Syrian (note how race didn’t matter in the Muslim Caliphate at that time, but after French and British colonialism, the Turks, Arabs, and Kurds are disunited due to nationalism introduced by the Anglo-Euro).

Note how the face of the Saracen or Turk is brown or black despite the fact that Turks and Syrians are white-skinned. This is because the colour black and brown was associated with the Muslims. In earlier history the Catholic church had a black Pope and in previous times there were rulers who had black skin.

The Muslims entered Europe via North Africa entering Spain and attempting to invade France. These North African armies consisted of Arabs who were pre-dominantly dusky skinned and their African Muslim counterparts who were both black and white-skinned. Africa has a mix of Berbers, who are white-skinned and the dominant black-skinned Africans. The Muslim African armies were beaten by Charles Martel, the grandfather of Charlemagne of France in the 8th century. Charles is known as the ‘Hammer’ for hammering and defeating Muslims and other Europeans, forcing many of them to convert to Christianity. Charlemagne gave Europe its modern identity. Concepts like the European Union and NATO have their origin with Charlemagne and the unification of Europe. There is even a Charlemagne award in the modern age. Bill Clinton was a recipient of this award and I wouldn’t be surprised if the butcher Tony Blair has received the award. Blair is now ‘the peace envoy to the Middle East’. These ironic titles that the Anglo-Euro gives, like ‘The Nobel Peace Prize’, a peace award named after the guy who made dynamite. But I digress. Blackness was associated with Muslims by Europe around this time. North Africa, North-East Africa, North West Africa, were all major centres of Muslim learning. A place like Timbuktu had more trade of books across the Sahara than other commodities like salt at one point.

A quick side point: I do not agree that the term ‘white’ be used just for the Anglo-Euro Homosapien, as many races across the world, including many Muslims are white-skinned. Some Afro-centric moderns bring up Arabs enslaving Africans. The short response is that prior to Islam, Arabs were enslaving people from all nations and not just Africans. Examples like Suhayb the European slave, who was a companion of the Prophet (peace be upon him), or Salman the Persian.

After Islam, the Shariah banned the enslaving of free people. That was totally abolished. In Islam, the only category of people who were enslaved were prisoners of war. Those people who waged war on Muslims. But they were only enslaved if they were doing the same with Muslim slaves. Slavery was not based on skin colour or enslaving free people. Slaves were given rights in Islam, like wearing the same quality clothes as the owner and eating the same type of food, limited work hours and the right to complain to the government. The Quran encouraged Muslims to free slaves and many of them were freed until finally slavery was totally abolished by Muhammad al-Fatih, the conqueror of Constantinople.

George Murray claims the Prophet of Islam (peace be upon him) was a slave owner. This Anglo-Euro deflection fails to mention that the Prophet (peace be upon him) freed 63 slaves, one for every year of his life, and bought slaves only to free them. Other times they were gifted to him and he freed them. As stated Islam abolished enslaving free people and racism.

So how did this racist bigotted view of Africans and Muslims enter the UK? Charlemagne was a Frank. France became the centre point of anti-Islam sentiments. This of course, still exists in France. France killed one-third of the male population of Algeria at one point, has never apologised, yet holds Holocaust memorials for Jews who were killed by Germans! From France in 1066 a crusade was sanctioned against England to take its wealth and fund the recapture of Jerusalem from the Muslims. England was abundant with silver and livestock. William the Conqueror sacked England (we all studied this in school) and taxed England dry. He was a violent man and established the Domesday Book, with the intention of taxing England until the day of Judgement. This was the foundation of a bigotted society and the start of the colonialist empires. The Norman Saxons were brutal to the natives of England. In 1099 Jerusalem was sacked by the Anglo-Euro. It was no coincidence that this occurred only 33 years after the sacking of England and both of these invasions were sanctioned by the Pope. That is the root of the ‘Saracens Head’ and ‘Turks Head’ caricatures.

Many of us are taught regarding 1492 and how Columbus supposedly discovered America. Yet, what we are not told in school is that this expedition was just six months after the Muslims were expelled from Spain and many exiled to Africa. In Columbus’s diary, he states his goal as an attempt to take the riches of India to fund a new crusade to recapture Jerusalem from the Muslims. Columbus was also a Jew feigning Catholicism. I can write so much more regarding this entire enterprise: India, Columbus, Africa, the Jewish tax collectors for Richard the so-called Lionheart (his statue is outside the British parliament and like Blair or Churchill he was a murderer of Blacks and Muslims), Vasco De Gama and the naval crusades, and how all of this formed the modern world. The peak of this entire enterprise was when Sultan Abdul Hamid II was forced to abdicate in 1909 and in 1917 Jerusalem was recaptured by the Anglo-Euro for the Zionists. On the ashes of the Caliphate, you have Arab nationalism, Turkish nationalism, Kurdish nationalism and numerous banana republics all governed by the Anglo-Euro power structure with the IMF, UN, World Bank and a host of other institutions. Some mention China as an alternative to the Anglo-Euro hegemony. My response to that is that China is governed by Communism. Communism is the brainchild of the Jewish Karl Marx, Trotsky and others. Communism has its roots in London and Wall Street as any well-read person will know.