[Q-ID0567] What is the correct belief regarding the Finality of Prophethood and why is it that Mirza Ghulam Ahmad Qadiyani and his followers are disbelievers?

What do the scholars of the Dīn and muftīs of the Sacred Law state regarding the following issue: What is our belief regarding Khatm al-Nabuwwah [the Seal i.e. Finality of Prophethood]. Please can you mention it with proofs and why is it that Mirzā Ghulām Ahmad Qādiyānī and his followers are disbelievers? Please mention their beliefs; may Allāh reward you greatly.

The belief of all Muslims regarding the Prophet of all Prophets Muhammad Mustafā [the Chosen One] ﷺ is this that the Noble Prophet is Khātam al-Nabiyyīn [the Seal of all Prophets], meaning he is the final of all Prophets and Allāh Almighty has concluded the system of Prophethood upon Muhammad Mustafā ﷺ, in that there cannot be any new Prophet during or after the blessed era of the Noble Prophet ﷺ. Whoever believes that someone can attain Prophethood in the same era as the Holy Prophet ﷺ or after, or even believes it to be possible, such a person is a disbeliever and if anyone doubts the disbelief of such a person, then he is also a disbeliever. This is because this belief is one which is qat’ī [absolute], īmānī [part of faith], Qur’ānī [established from the Holy Qur’ān], yaqīnī [definitive], idh’ānī [submitted towards] and ijmā’ī [agreed upon], just like Allāh ﷻ states in the Holy Qur’ān.

{Muhammad [ﷺ] is not the father of any man amongst you. Yes, he is the Messenger of Allāh and the Last of all the Prophets, and Allāh knows everything}

It is stated in Bukhārī Sharīf that the Noble Messenger ﷺ said that,

“I am the final of all Prophets.”

“I am the final Prophet; there is no Prophet after me.”

The Messenger of Allāh ﷺ stated that,

“Prophethood and Messengership have concluded; there will be no Messenger after me nor any Prophet.”

The Imām of the Ahl al-Sunnah, the Reviver of the Religion, A’lā Hazrat Mawlānā al-Shāh Imām Ahmad Ridā Khān, may Allāh shower mercy upon him, states that having acknowledged the Noble Messenger Muhammad, the Messenger of Allāh ﷺ as Khātam al-Nabiyyīn [the Seal of all Prophets]; be it in terms of his blessed era or after, to regard the revival of a new Prophet as definitely & absolutely impossible and utterly invalid is a major Fard and part of certainty.

It is stated in Durr Mukhtār that whoever comes to know of these disgusting matters and then,

“Whoever doubts in the disbelief and punishment of someone who has such said becomes a disbeliever himself.”

Qādiyānīs are known as the followers of Mirzā Ghulām Ahmad Qādiyānī, and Mirzā Ghulām Ahmad Qādiyānī is the one who falsely claimed to be a Prophet. The claim of Prophethood itself was enough to become a disbeliever, as it is to reject the Holy Qur’ān because the Noble Messenger Muhammad Mustafā ﷺ has been regarded as Khātam al-Nabiyyīn [the Final of all Prophets], however he did not just stop there.

He had the sheer audacity to be severely blasphemous with no care whatsoever in regards to the status of the Noble Prophets, upon whom be peace, especially Sayyidunā ‘Īsā, upon whom be peace, and his respected pure mother Siddīqah Maryam, may Allāh be pleased with them; Mirzā Ghulām actually used extremely filthy and vile words with regards to her honourable status.

There are more than 80 books of Mirzā, some of which are as follows: “Ānjām e Ātham”, “Zamīmah Ānjam-e-Ātham”, “Kashtī-e-Nūh”, “Izālah-e-Awhām”, “Dāfi-’ul-Balā’ wa Mi’yār Ahl-e-Istifā’”, “Arba’īn”, etc. He has arranged these books into 23 parts in the book named “Rūhānī Khazā’in”. Furthermore, there are many leaflets of this devil consisting of 3 types. Also, there are many impure works of his which are in 10 parts.

Now read and listen to his impure sayings which are present in these books. We have included the exact screenshot of the texts from the original books so that there is no room for doubt.

Mirzā claims on page 533 in “Izālah-e-Awhām” that the Lord Almighty has kept the name of this feeble person [referring to himself] as Ummatī in “Barāhīn-e-Ahmadiyyah” and a Prophet as well.

On page 52 of Anjām-e-Ātham, he claims [that Allāh said], “O Ahmad! Your name will be complete once Mine is complete.”

He has applied the blessed verses to himself which were in fact revealed with regards to the revered status of the Prophet of all Prophets, Muhammad Mustafā ﷺ.

The mercy is me. Also I take the following verse to mean my own self,

It is mentioned on page 6 in Dāfi-’ul-Balā’ that, “Allāh Almighty states to me,

‘O Ghulām Ahmad! You are in the place of My offspring; you are from Me and I am from you.’”

He claims on page 688 of Izālah-e-Awhām that, “The Divine Inspiration and Divine Revelation of Muhammad Mustafā ﷺ used to turn out incorrect.” 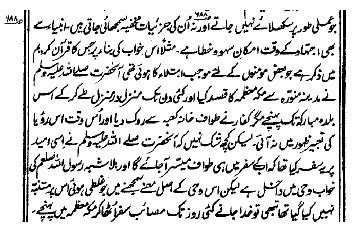 It is claimed on page 8 in Izālah-e-Awhām that, “The prophecies & predictions of Hazrat Mūsā did not turn out to be in the manner which he had wished and hoped for.”

The purpose of him saying this was to try and demonstrate that the prophecies & predictions of Sayyidunā ‘Īsā were even more untrue and incorrect.

It is claimed on page 750 in Izālah-e-Awhām that, “The verse in Sūrah al-Baqarah, which mentions the incident of a dead person who was brought back to life after being struck with a piece of beef, was only used by Hazrat Mūsā to create unnecessary fear (i.e. a threat) and it was actually a form of mesmerism.”

Mesmerism is that branch of knowledge which Dr. Franz Mesmer pioneered and who was from Austria. This is such a science in which the effect of an image or thought is placed inside someone and then this person is asked about his hidden as well as future actions.

He claims on page 753 of Izālah-e-Awhām that, “The incident in the Holy Qur’ān relating to the miracle of Hazrat Ibrāhīm and the 4 birds was also a result of mesmerism.”

It is claimed on page 629 of Izālah-e-Awhām that, “In the time of a certain king, 400 Prophets predicted his victory but they were all wrong as he lost the battle, in fact dying on that battlefield.”

It is claimed on page 13, volume 2 of Arba’īn that, “Neither ‘Īsā nor Mūsā could perfectly and completely be those who can guide.”

These Ūlū al-‘Azm Messengers[1] being ones who can guide is out of the question according to him; he didn’t even regarded them as guided in the first place. We seek refuge in Allāh.

The blasphemy against Sayyidunā ‘Īsā

He has uttered many blasphemous statements specifically against Sayyidunā ‘Īsā, upon whom be peace, some of which are as follows:

He claims on page 13 in his book Mi’yār that, “O Christian missionaries! Do not say that ’ربنا المسيح‘ – ‘Īsā (Jesus) is our Lord’, for there is one amongst you (referring to himself) who is greater than ‘Īsā.”

He claims on page 13-14 in his book Mi’yār that, “Allāh Almighty has sent a Messiah, in the present Ummah, who supersedes the past Messiah in glory and grace. He named this other Messiah Ghulām Ahmād; this is to suggest that the Messiah of the Christians is inferior in status and cannot even compare to a slave of Ahmad, meaning, how is he even a Messiah, who is also lower in terms of his ability to intercede and closeness to Allāh.”

He also claims on page 15 in his book Dāfi-‘ul-Balā’ that, “Allāh has power over everything, as per His promise, but He cannot bring back to earth a person who had already caused so much destruction to the world.”

He writes on page 13 in I’jāz-e-Ahmadī that, “The Jews actually have such strong objections against the Prophethood of ‘Īsā that there is not much that even I can respond in order for it to be clarified. The only thing that I can say is that he is a Prophet because the Qur’ān says that he is a Prophet. With the exception of this, there is no other proof of his Prophethood. Rather, there are a number of proofs which show the invalidity of his Prophethood.”

He has regarded the objection from the Jews as correct from this statement of his own and, at the same time, has also objected on the Holy Qur’ān, saying that it preaches such matters & beliefs upon which there are proofs and evidence of their invalidity.

He says on page 14 in I’jāz-e-Ahmadī that, “Christians claim that he is God, whereas in actual fact, even his Prophethood isn’t even proven.”

In the same book, he further states on page 24 that, “Sometimes, Hazrat ‘Īsā used to have satanic inspirations as well.”

It is written on page 24 of I’jāz-e-Ahmadī that, “Most of his predictions & prophecies were incorrect.”

He further says on page 14 in I’jāz-e-Ahmadī that, “Ah! Where should I go to lament, that 3 of his prophecies were proven to be absolutely incorrect.”

He writes on the inside cover on page 3 of Dāfi-‘ul-Balā’ that, “I fully acknowledge that the Messiah [Sayyidunā ‘Īsā] was a very great personality in comparison to others in his era, and Allāh Almighty knows best. I cannot however accept him as being a true saviour, as a true saviour in reality is one who was born in Arabia. Now I have come though in the form of a shadow [of a Prophet] – the humble Mirzā Ghulām Ahmad from Qādiyān.” 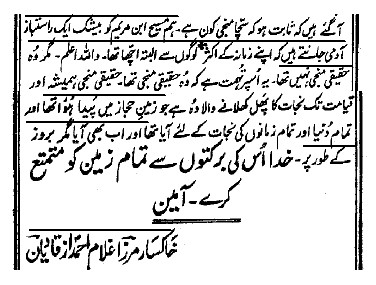 It says on page 7 in Zamīmah Ānjām-e-Ātham that, “He [i.e. Sayyidunā ‘Īsā] had a very close relationship to a tribe of drifters; this was probably because of his ancestral relationship to that tribe. Otherwise, there was no other reason for a pious man like him to permit a young gypsy female to apply perfume purchased from her illegitimate earnings of adultery, to his head with her impure hands and to rub her hair against his legs. Those who understand will realise from this as to what sort of a person this was.”

Furthermore, he has further attempted to severely attack this revered and chosen Messenger by using some utterly derogatory words, having accusing of him being evil, a cheat, stupid, foul mouthed, vulgar, a liar, a thief, dim-witted, unfortunate, utterly dishonest and a follower of the devil.

Everyone knows that a paternal grandmother is the mother of the father, so he has tried to claim that Sayyidunā ‘Īsā has a father, which contradicts the Holy Qur’ān itself.

He explicitly mentions in another place, namely Kashtī-e-Nūh on page 16, that Jesus Christ had 4 blood brothers and 2 blood sisters, meaning that they were the children of Sayyidunā Yūsuf and Sayyidah Maryam.

In short, where is one meant to count the extent to which the false and atrociously disgusting statements of this Dajjāl Qādiyānī have reached; look as to how he has barked such filthy remarks regarding such a greatly revered and noble Prophet, who is amongst the Ūlū al-‘Azm Messengers and whose excellences have specifically been mentioned in the Majestic Qur’ān. This is the reason as to why, having barked all of this, Mirzā Ghulām Ahmad became a disbeliever, and his followers, thinking of him as a Muslim, are also regarded as disbelievers. In fact, the Scholars of Islām agree upon the fact that he who even doubts the disbelief and punishment of such a person is also a disbeliever.

Read the original Urdu answer here: [Q-ID0567] What is the correct belief regarding the Finality of Prophethood and why is it that Mirza Ghulam Ahmad Qadiyani and his followers are disbelievers?