[Q-ID0221] Should we keep family ties with relatives who have misguided beliefs?

Zaid’s brother in law Bakr (who is the son in law of this aunt), who is sunni himself and his wife is also sunni, says that using wisdom in action (hikmat ‘amali) these relationships should be maintained, family ties should be joined not broken, one should also visit these people in their moments of joy and sorrow.  In support of his position Bakr presents the example of Abdullah bin Ubayy ibn Salūl [the leader of the munāfiqīn in Madinah Munawwarah].

Should Zaid allow his wife to meet her heretical aunt and her husband?
Please clarify this matter in detail with evidences.
Please clarify, May you be rewarded.

The Qur`ān and Sunnah has forbidden friendship and affection for such a heretical innovator whose heresy does not reach to the level of kufr. Heartfelt love and affection for apostates and polytheists is even more impermissible and harām.

Allāh (Glory be to Him) says:

“You will not find a people who believe in Allah and the last Day taking as their friends those who opposed Allah and His Messenger, even though they be their fathers or their sons or their brethren or their kinsmen.”

“And do not lean towards wrong doers, lest the Fire Should touch you.”

Allāh, Most Transcendent is He has even forbidden from meeting and sitting with heretics.

“and whenever the shaytān may make you forget, then sit not you after recollection with the unjust people”

There are many noble verses like this that emphasise distancing oneself and fleeing from heretics. Further to this the Noble Messenger (may the peace and blessings of Allāh be upon him) has severely forbidden sitting in the company of these people saying:

“Beware! Keep yourselves away from them and them away from yourselves that they do not put you into tribulation”  [Musnad Ahmad]

The Prophet of Mercy (may the peace and blessings of Allāh be upon him) said:

“The similitude of the evil seating companion is like the example of the blacksmith if the blackness of his soot doesn’t befall you his smoke does befall you.”  [Sunan Abū Dāwūd, Sunan al-Nasā’ī]

The Prophet (may the peace and blessings of Allāh be upon him) also said:

“Stay away from the evil seating companion because you will be known by him.” [Ibn ‘Asākir]

Experience is a witness to the statement:

Al-Muhaddith Shaykh Abd al-‘Azīz al-Dehlawī (may Allāh shower him with mercy) says: “The person who makes friendship with and has love for heretics the light of īmān is stripped from him.”

Our salvation itself is in our following in the footsteps of our noble predecessors.  They are the manifestation of “harsh with disbelievers merciful with the believers”.

Therefore Zaid should keep good relations with his brother in law and his family because they are sunnis of correct ‘aqīdah and should share in their joy and sorrow.

However because their aunt and uncle are non-sunnīs and carry evil beliefs, if they have reached the level of deviance that they blaspheme in the right of Allāh (Most High) and His Messenger (may the peace and blessings of Allāh be upon him), they use disrespectful words concerning them, or having awareness of the words of blasphemers they take them as their religious scholars or they disrespect the awliyā` and the righteous ones of this ummah, then he should keep himself, his wife, children and his brother in law and others away from such people.

If the Aunt and the Uncle haven’t reached to this degree rather because of lack of acquaintance they mix with heretics and when they hear the blasphemous statements they manifest dislike then they should be informed about the reality of matters with love and affection and every possible effort should be made in rectifying them. They should be explained to through every possible wisdom and planning.  They should be informed of the correct ‘Aqīdah through the light of the Qur’ān, Hadīth and the statements of the salaf (righteous predecessors). They should be introduced and attached to ‘Ulamā’ known for their precaution. This is because the Dīn is is to desire and do good for others. In this type of scenario the merciful statement of Allāh (Most Transcendent) should be kept at the forefront of the mind:

“Save yourself and your families from the Fire whose fuel is men and stones.”

Bakr’s justifying his stance with the example of the Munāfiq ‘Abdullah ibn Ubayy, that the Messenger of Mercy (may the peace and blessings of Allāh be upon him) granted him 2 shirts as funeral shroud for him and presented himself at his grave, as is mentioned in the Sihāh Sittah, then this is presenting of a matter out of context and out of place.

The Great Mujaddid al-Imām Ahmad Ridā Khān (May Allāh sanctify his secret) has mentioned this in detail in his Fatāwā – refer to al-Fatāwā al-Ridwiyyah Volume 9 pages 115 & 116.

However if a sturdy erudite ‘ālim or a walī kāmil on the basis of wisdom and with the intention of rectifying the ‘aqīdah brings a heretic closer to himself this is a different matter.

Scanned pages of the original Urdu answer are below: 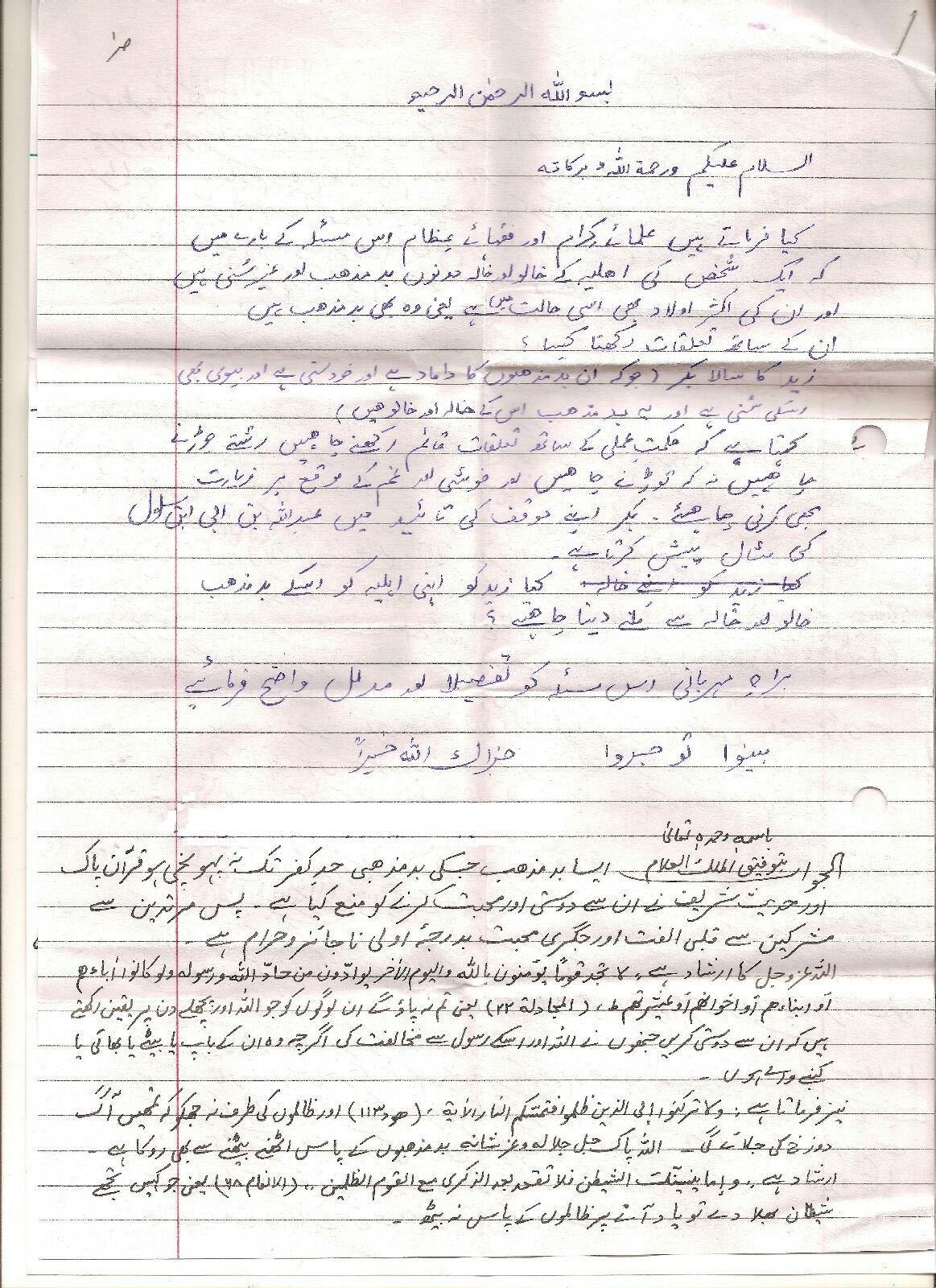 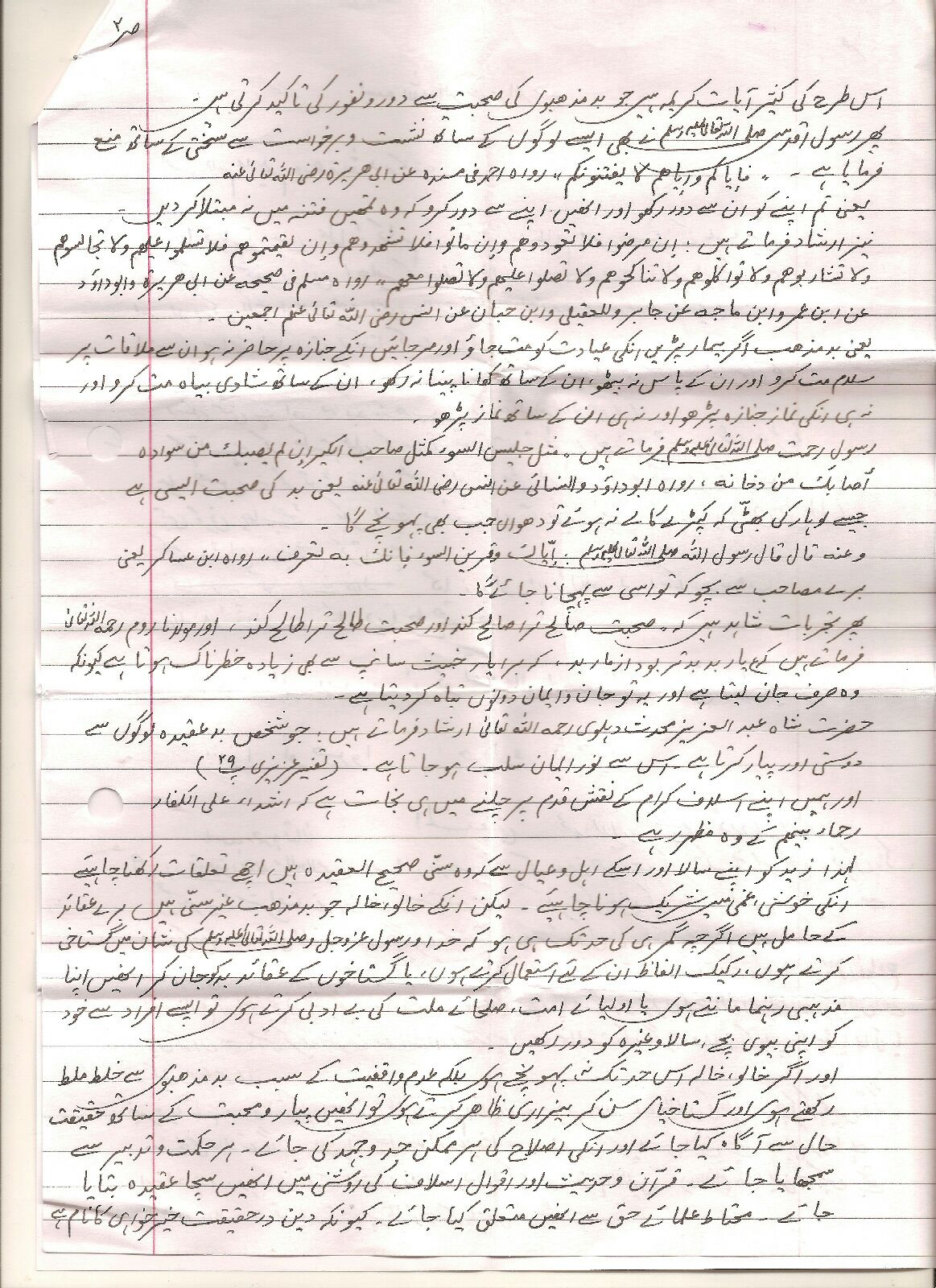 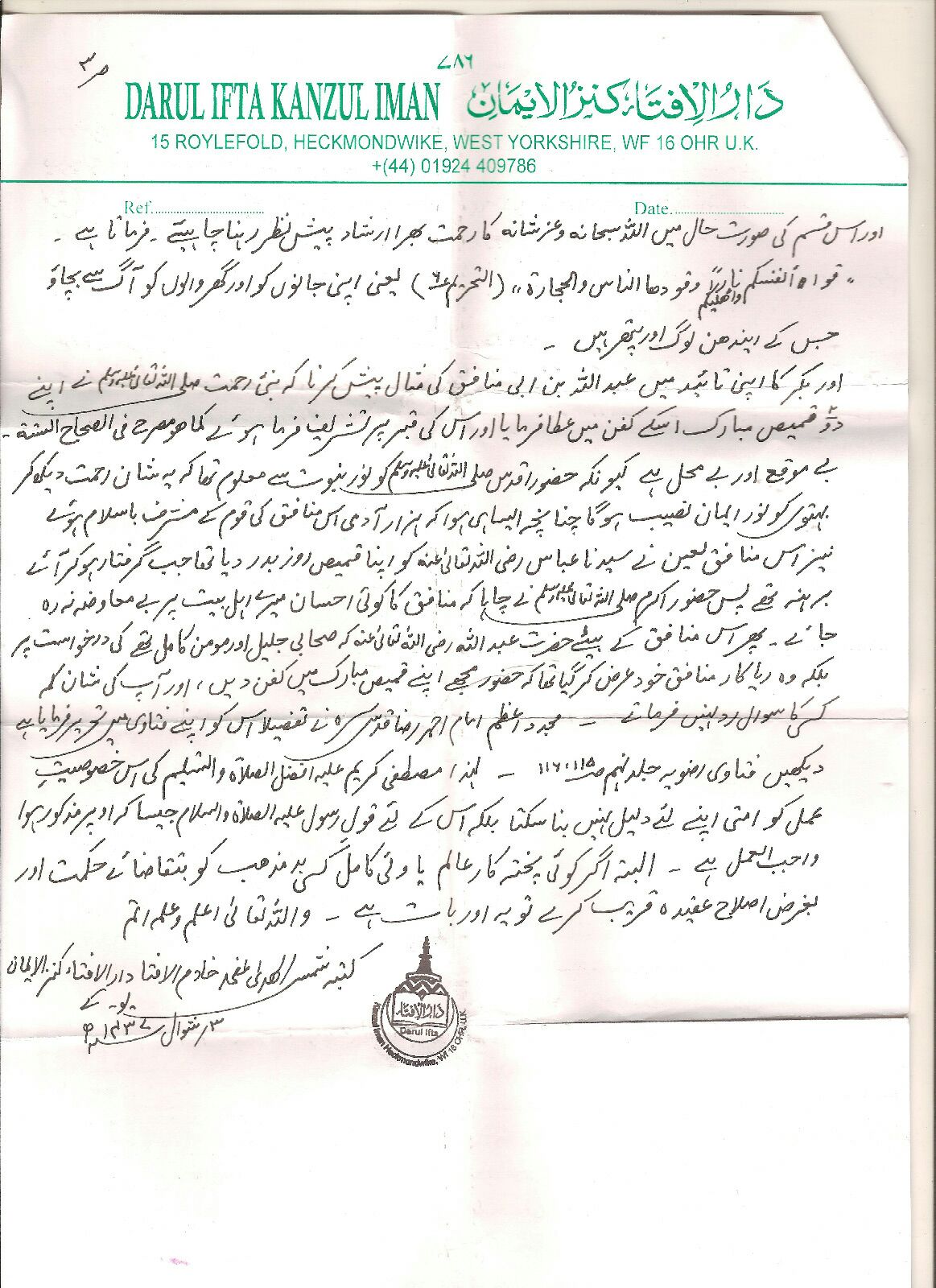